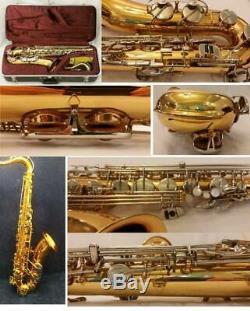 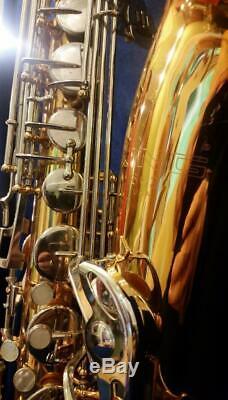 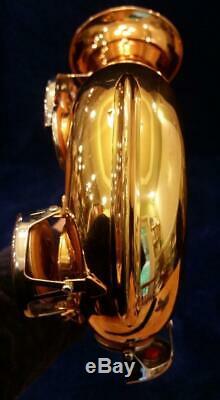 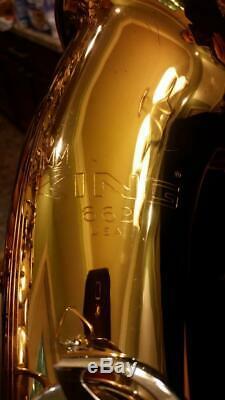 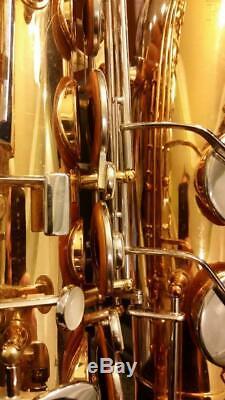 This tenor sax is in very good condition. This is in excellent condition & ready to play King tenor saxophone. I last had it serviced in July, 2017 and have only played it a handful of times since. As with all used instruments, however, I would advise taking it to your own technician upon receipt. This particular model 662 has rolled toneholes and good pads.

There is a dent on the back, but doesn't affect the sound noted in the pictures. If you have any questions please let me know. Information on the King 662 is hard to find, but here was something I found on a saxophone forum.

People mostly thought that they were just some late King sorta student model along the lines of an Empire or the like. But then I believe it was Milandro who noticed how some of the details looked a lot like a JK horn. Then in that same thread a couple of members chimed in saying they had had either a 662 or the Alto version Empire 665, and they were NOT student/budget horns.... And they were sorry they had gotten rid of'em. That, plus the fact that here there appeared to be a usa-made modern horn with rolled toneholes...

Was enough to make ME interested; I picked up a pair of'em earlier this year. With horns in hand and boning up on some'80's-'90's u. Here's what I can say. These are UMI period horns... One I have is a'98 because it still has it's original paperwork. Danny Henkin (aka DJH) bought Conn from MacMillan Publishing in 1980, temporarily saving the name from the crap bin.

Soil (King and Armstrong had never left). Production at a time when most u. Corporations were giving their workforce the shaft, and bolting offshore. So, you will notice that Armstrong, King, and Conn horns of this period share a lot of attributes.

It seems King Eastlake sax production ceased under UMI, because after'84 one no longer finds the traditional King saxes available no Cleveland 615, no post-S20 King 2416, no Zephyr, etc.... For a time there I wondered whether the 662 was just an Armstrong, or maybe a Conn 22M clone.

But it is actually neither. This model has RTH and although it sorta resembles the other two, it has some different keywork details and oh, gosh.... Does it have a killer tone!

Huuuge bottom, big and dark. Making sure it wasn't just me, I have had a few pros test it out and they also reacted the same way. Now I dunno whether that's because it is knocked off of a JK body or not, but it does share a lotta sonic traits. So, my speculation would be that this was meant to be a top-line horn. I can tell you it IS a pretty darn good horn.

It isn't just student fare. This is interesting to me because it illustrates that as late as the late'90's, there were still good u. Who'd'a thunk it???